A couple weeks ago I ordered some carnivorous plants from Cascade Carnivores. One of the items was described as Drosera sp "Lake Badgerup" gemmae. Stupid me, I didn't know what gemmae meant and assumed it was part of the name of the plant. It does look Latin, doesn't it? It didn't fit the binomial naming convention, but not all names do, and sometimes people depart from official names. Besides, it looks like there's a cultivar name stuck in there, too.

Some time later, when I got my package, I realized my mistake. Other plants I had ordered were carefully planted with sphagnum moss and put in ziplock bags. One very small ziplock bag, though, seemed to contain only a small filter, like a tissue you'd clean a pair of glasses with, but folded over a couple times. It turned out, this contained the 15 or so gemmae of the D. 'Lake Badgerup' I'd ordered.

Gemmae, it turns out, are tiny leaves used for reproductive purposes. A single one is not much larger than the period at the end of a sentence. The package said to plant immediately. Well, I couldn't do that, but I did spend some time learning what gemmae were and how to care for them. I threw together a mix of ingredients that I thought might work and then used a pin to remove the gemmae from the tissue and place them on the potting media I'd created.

After I'd done that, I used a high powered lens to locate all the gemmae, and marked each one with a tooth pick. Here you see one of the gemmae next to a tooth pick. 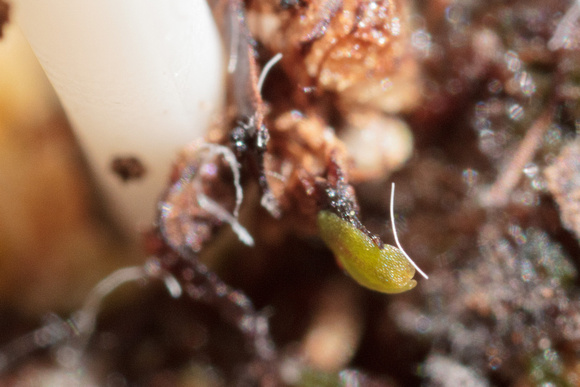 After a couple weeks of growth, I finally have a plant that shows a typical sundew leaf. 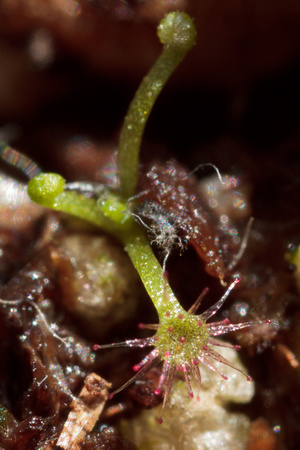 I didn't know this until I read up on sundew culture, but a good way to grow sundews is to raise them in rather tall pots, so that the bottom can be sitting in a tray of distilled water. The potting medium surface should be about 4 inches above the water level. The plants send roots down as far as they need to in order to get whatever moisture they need. On this picture, you can see a purple-colored root being sent down from the gemma while the new leaves are growing upward in a whorl. 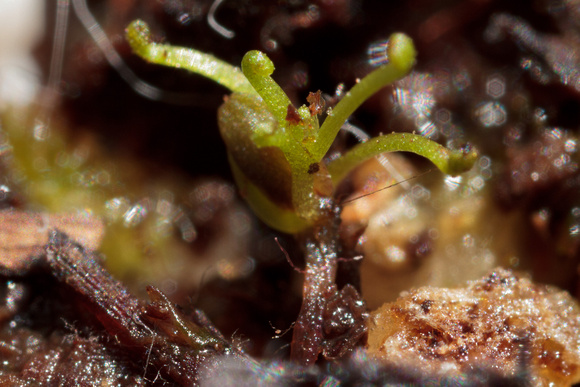