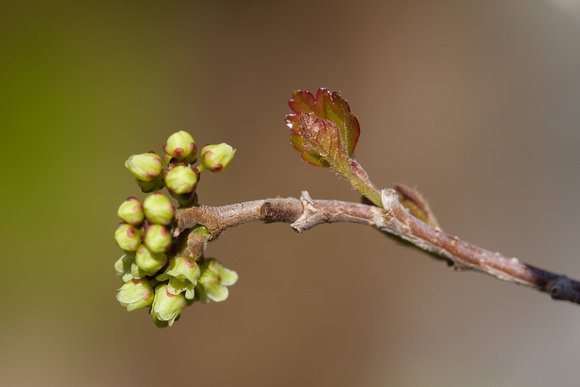 I recently bought a couple Rhus aromatica plants. The tips of the stems have been loaded with flower buds for some time, so I've been looking forward to their opening. The name of the plant suggests the flowers have a good smell, and, indeed they do, smelling like honey, but the name actually derives from the smell of crushed stems and leaves. That's an activity I won't be doing until/unless the plants need to be pruned.

Leaves emerge shortly after the flowers bloom, or at the same time. When fully grown, the leaves resemble poison ivy, but the plant is not poisonous. In fact, it apparently is sometimes used to make tea. I'll add pictures when the leaves mature.

Fruit are red when mature and a valuable resource to wildlife.