There is a new genus of flies on bugguide.net now. It's not a newly discovered genus. The website just happened not to have any information on it yet. The genus is one I've had my eye on for years, pretty much since I moved to Austin. I recall that in the mid-90s, Dr. Gilbert was doing research on these flies. They're special because they keep Texas native fire ants in check. They do this by laying their eggs on fire ants. The grubs burrow their way into the heads of the fire ants, where they live until they emerge as adult flies. They're commonly called phorid flies, or Phoridae, but this is a large and diverse family. The members of this family this blog entry is about is just one of the genera in the family, Pseudacteon, the fire ant decapitating flies.

Fire ants -- those two words are enough to strike fear in many people. Listen to the radio or watch TV for a period of time and you will eventually see advertisements to get rid of these pesky creatures. The fire ants the ads are about, though, are the imported fire ants from South America, Solenopsis invicta.

Why are the commercials about the imported ants rather than the native ones? They're closely related. The ones native to Texas are Solenopsis geminata. But the imported ones don't have to worry about the parasites that haunt the natives. That includes species of fire ant decapitating flies. The thing is, though, that the flies that infest one species of ant don't infest the other. Interestingly, Texas fire ants have been introduced to South America just like their ants were introduced here. And the bigger pest to the South Americans are the Texas native fire ants, because the parasites that keep them at bay are not found there.

Most Texans know that fire ants are evil and that they wreak havoc on other wildlife, including other ants. When I first became aware of Dr. Gilbert's research, I heard him speaking on the radio how the imported fire ants had killed the native ones all over the countryside. Interestingly, in town, there were pockets of the natives. The explanation for how the natives survived in town but not in the country goes something like this. The imported fire ants, having effectively no predators to worry about, wreak havoc wherever they go because there is nothing to stop them. Mounds frequently have multiple queens, thus allowing them to multiply rapidly. If they expand into the territory of other ants, war ensues, and the imported ants typically win the battle, because they have allies -- the predators of the native ants. However, people generally hate fire ants, they buy poison, and kill the fire ants.

Because they don't have a fear of predators, they build large mounds, and boil out of them when the mounds are disturbed. This catches the attention of people, who dispatch them pretty quickly. However, not everyone poisons ants, so there are areas around town where they are safe. If they don't move, they don't get killed, and imported fire ants that try to settle next door are dispatched by the neighbors who hate fire ants. It's an interesting scenario, because it requires both people who kill fire ants and people who don't.

Anyway, in the mid-1990s, Dr. Gilbert was looking for areas around town where there were pockets of native fire ants. There are some miniscule details that can be used to tell them apart, but the easiest way is to look for the largest workers. The ones that are native to Texas have huge heads (see the picture on the right, above) compared to the size of the rest of their bodies. The imported fire ants also have large and small workers, but the large ones just look like bigger versions of the small ones. 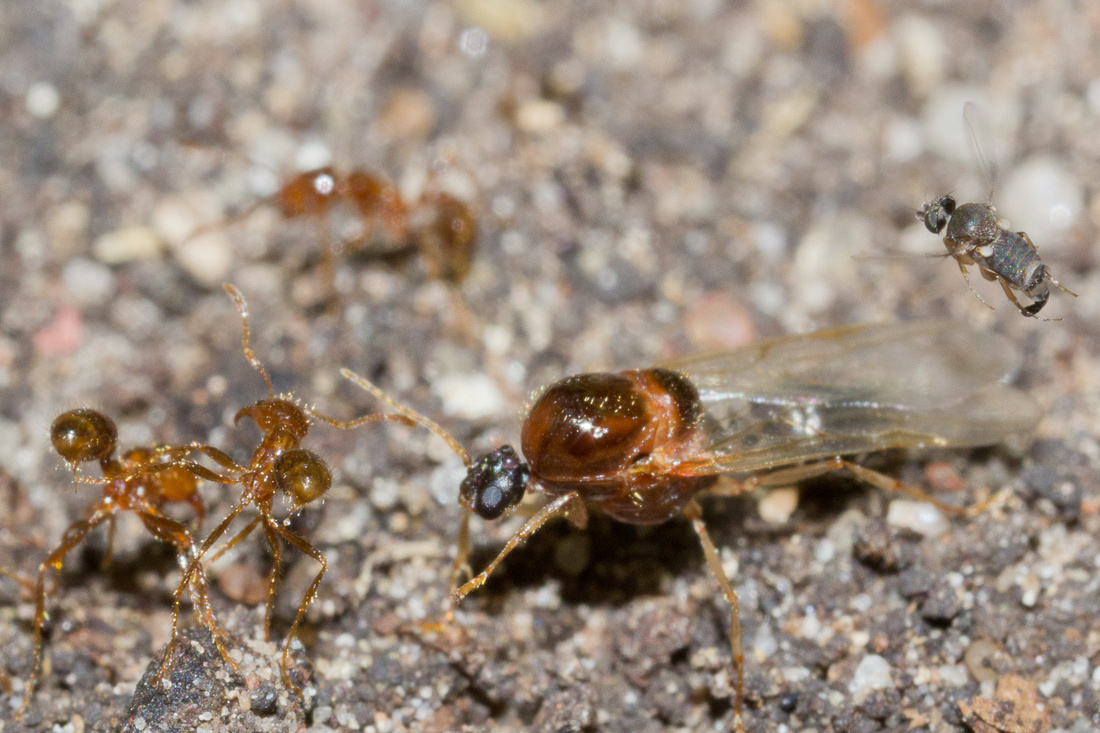 So today I was out in the yard and noticed the ants were swarming in my black bamboo pot. Like bees, ants periodically swarm. New queens and drones emerge from the nest with wings. They fly off to start a new colony somewhere else. Pictured here is a drone. A drone has a large thorax and a relatively small, dark head. They exist only to procreate at the start of a new colony. After they've done their duty, they die, and the queen takes over running the colony. She instructs the workers what to do using pheromones, chemical signals that they pick up with their antennae. 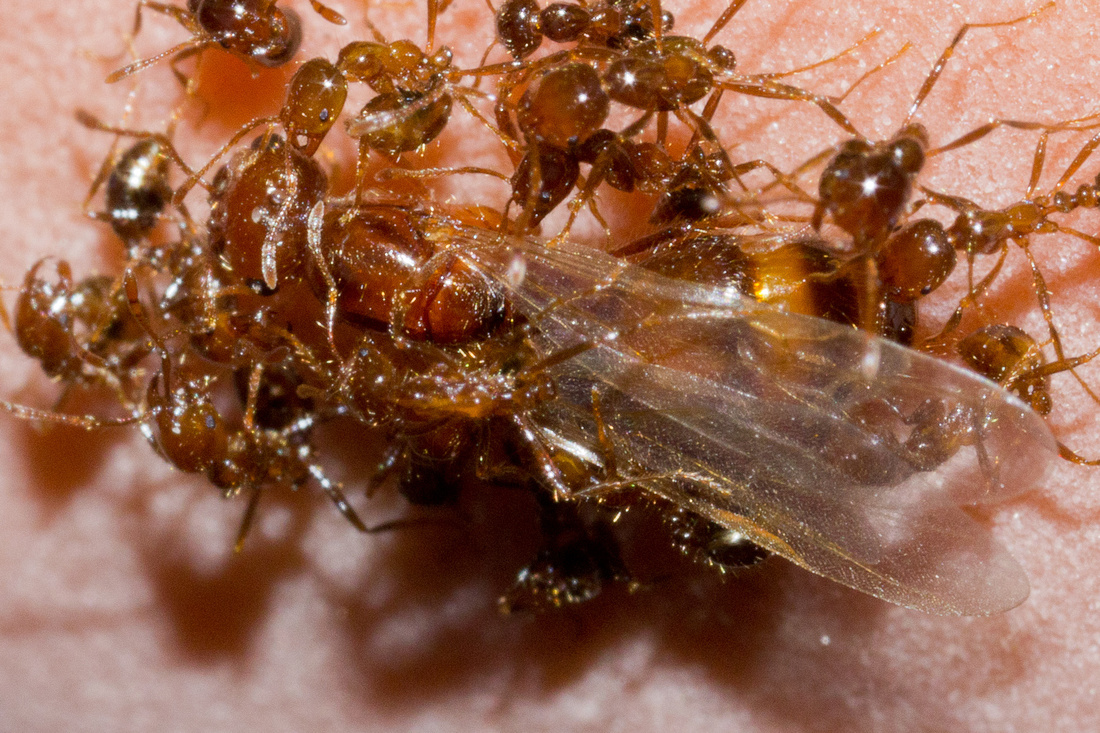 An alate queen is about the same size as a drone, but her head is bigger, and it's a brown color rather than being nearly black. The queen also has a larger abdomen. The queens are also more fastidiously cared for by the workers. During a swarm, the queens typically will be surrounded by workers, while the drones wander around mostly solitary. Alate queens are new queens that have wings. Mature reproductive queens lose their wings when they settle in to their new home. When phorid flies are around, the ants don this curious defensive posture, tucking their abdomens forward, under their heads. However, as the Borg say, resistance is futile. The flies have the advantage of the air, and they're quite nimble fliers. A gravid female swoops in on the ant, laying her egg on her. The egg hatches, and the larva eats its way into the head of the ant.