I have a couple chinkapin oaks in my front yard that have not been growing as fast as I would like. A couple years ago, I excavated one of them because it was swaying side to side in the wind and not growing as fast as the other one. As I suspected, there was evidence that it had been planted too deep, so I proceeded to jack it up. Since the tree freely swayed from side to side in one direction, I took advantage of that to use the tree as a lever to jack it up: tilt it one direction, then place rocks, bricks, and boards underneath, then tip it the other direction, and place more debris under it. In so doing, I successfully jacked the tree up about six inches.

A year later, I excavated again to check on the progress and to plant a seedling whose purpose was to grow roots perpendicular to the other ones. I wrote about it before my site had a blog feature. Open each image to see commentary.

This weekend, I excavated the other one. It was also planted too deep and additionally had an encircling root. 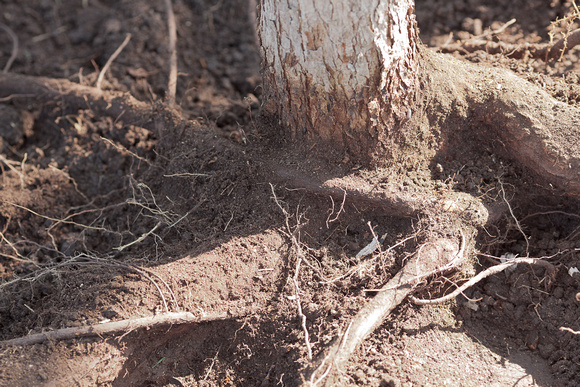 This is not such a bad encircliing root, but I decided to cut it off. While I was at it, I thought I'd try my hand at grafting the root. If you look carefully, you can tell the root already has a natural graft. When I cut the root near the base on the right side, I also had to sever a root going straight down. This freed up the root, which I intended to graft to the trunk with a sort of veneer graft. Unfortunately, I cut the root too short, so I didn't get the kind of approach I wanted. I may have to add a bridge graft to it. 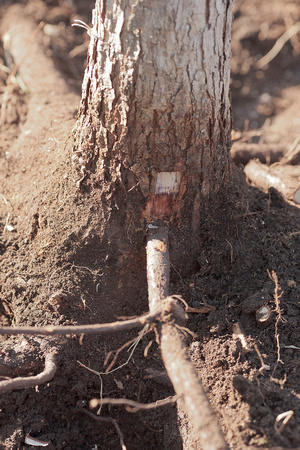 On the right side of the image about 2/3 of the way down, you can see where I severed the downward root. To complete the graft, I nailed the root to the trunk. I didn't drive the nail all the way because I couldn't get to it without damaging the tree. That doesn't matter. The nail will do just fine like this. After nailing, I painted with a grafting seal. 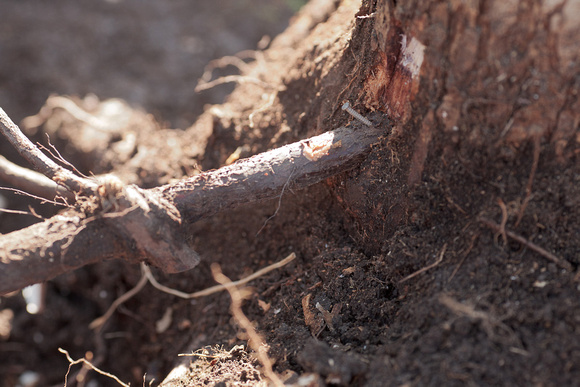 If this graft doesn't take, it's no great loss. My first thought was to just prune it off. This graft is really just grafting practice for me. I may attempt something similar on the other tree.

Victor's Pictures
Roots seem to be easier to graft, actually, although I haven't done much root grafting.

I need to take updated pictures of this graft. It has healed very well.
Jay(non-registered)
Wow, I had no idea you could even graft roots! I love your site, I've learned so much from just a casual browse. Beautiful photos.